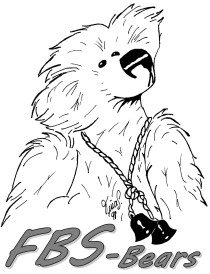 WOLFSBURG - the city in Germany well known for its legendary cars. Here, as you can tell, are not only cars which come to live, but teddy bears as well. In 1995 we began to collect. Inspired of a festival in a nearby town wich hosted a limited edition of Hermann-teddies we bought our first bear. What started as an innocent shopping expirience developed into a passion. The bear familie grew larger and larger...     The 1st April 1996 was the birthday of Fredys first teddy bear called “Kojak”. Many siblings followed this first one.

At one show we were asked why we wouldn´t exhibit since the bears we had with us were gaining interest. That was the start of our gypsy-fife. Up ´til now we have done a lot of shows in Europe and worldwide.Many good friendships developed with artists and collectors. We always look forward to the next show or exhibition because we will meet old and new friends. The expirience and the awards we have received show us how satisfactory this passion is.

Besides having our jobs as nurse in operations section and working for the mentioned famous car manufacturer we devote all our time to bear making. We enjoy most when developing new patterns and working on these. When a new bear comes to live and is presented we nervously await to see the sparkle in the eyes of collectors. When that happens we know that this new bear is a good one.

Our bears come to live through situations we expirience in real life. We try to catch moods, movements and wishes and turn all this into a new design which sometimes can even be a caricature. The last word has the collector - he or she decides if it is a well balanced design.

The FBS bears are created while using traditional ideals and also the unconventional sometimes “crazy” design. There are one-of-a-kind bears, one-of-a-design bears and small limited editions.

Fredy is the “father” of the traditional bears. Inspired by all the old fellows in our collection Fredy tries to capture the unspeakable charme of the nostalgic area. The sizes vary between12” and20” (30 to50 cm). Fredy uses mainly excelsior stuffing, shoebutton eyes and growlers.

"Don´t be so normal! I want things unusual and crazy!” - that´s the motto of Bettina. Her designs are filled with form and movement. She uses any possible kind of filling like glas, plastic or steel pellets and synthetik stuffing. Bear sizes range from7” to16,5” (18 to41 cm).

The gold coloured bell on the belly! 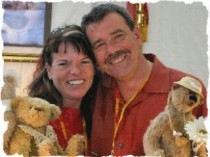